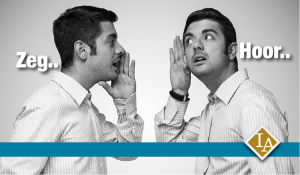 Just the other day I read an interesting remark made by a typical traditional buyer. He stated firmly: “I am only responsible for what I say, not for what others hear”. Well, I think that in our trade, just the opposite is the case.

As a procurement professional, you cannot achieve anything just by yourself. You need others to be involved in order to be successful. Because you don’t need the performance (be it goods, services or both) that you are going to buy; others do. Nor do you have the money to pay for it, someone else does. And because you are not going to deliver the performance yourself either, you will need the supplier(s) to co-operate with you as well. And they (your colleagues and suppliers) are all individual human beings, who’s behavior is primarily aimed at whatever serves their self interest best and is triggered by their thoughts and feelings.

Mind you, self interest is not just about advancing their career, making more money or becoming more important or powerful. It can also be something as simple as feeling good about themselves.

There is no such thing as ‘objective listening’. When you speak to someone, they don’t ‘hear’ with their ears. These ears are just the physical tools to translate the vibrating airwaves caused by your vocal cords into electrical pulses to their brain, which is where the actual ‘hearing’ takes place.

What do you imagine your colleagues may ‘hear’ when you state that “My involvement in your project will save the company a lot of money”? How does this translate to their thoughts and feelings, and thus to their behavior?

Obviously, this will depend on their reference; their previous experiences or the experiences which others, be it colleagues, friends, family or even media, have shared with them. Could it be that based on that reference, they will hear “oh, if you are involved, I will get to spend less on what I want to buy, so it is very likely that I will get less then I need”?

How do you think your statement “let’s critically review the specifications so they are aimed at what you need instead of what you want” will play out in their minds? Will this encourage them to welcome you into their project or is it more likely that they will do everything in their power to postpone your involvement to the latest possible moment?

“You should consider alternative, less costly solutions” sounds very different from “Have you ever given this alternative solution some thought” (leaving out the “less costly” part). Will your ‘bigger picture’ statement along the lines of “we need to look at the effect of this from the company’s perspective and not just what the impact is on your department’s performance” get them into co-operation mode, or will they just think “easy for you to say, but I am judged (and rewarded or punished) on my department’s results, not on the corporate bottom line”.

One thing we have to take into account is the psychological phenomenon called ‘confirmation bias’. This simply means that once people have made up their minds about something, they will only search for, or be open to, information which confirms their beliefs and they will neglect contradicting information. So if your colleagues are of firm believe that procurement is all about cutting costs, limiting choice and clipping their wings of freedom (and there is a track record of previous experiences to prove this), the only words they need to hear are “cost”, “savings” or maybe even just “money”, and their prejudiced opinion is confirmed. They will not hear anything else you have to say about adding value or mitigating risk and will act accordingly.

We’re in the people business. And people are primarily driven by emotion and are predictably irrational. Fortunately they are also very easily influenced. Unknowingly guided by their prejudiced believes and triggered by what they hear (or read for that matter); not by what you say (or write).